By our community reporter 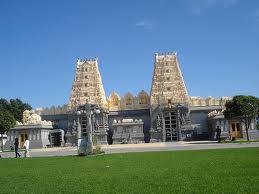 Melbourne: On Friday 5th April, 2013 immigration officials visited the Sri Shiva Vishnu Temple, Carrum Downs and are said to have interviewed a person in the Cultural centre’s canteen area. In fact, they were probably looking for two persons who were allegedly in breach of their 428 Visa (religious workers) and working as cooks in the canteen kitchen. One of the alleged person in breach of his visa had some time back had a ‘workplace injury’ in the canteen and the Hindu Society of Victoria (HSV) (the employer) allegedly in various breaches of the Fair Work Act, 2009 in respect of his ‘employment dues and entitlements’. The fellow has gone to the Solicitor and also alleged the HSV’s ‘negligence to follow proper ‘Work Safe Guidelines’.
These less than spiritual episodes at a place of worship have sent in shock waves in the Hindu and wider community. In fact, much more has happened and has been happening over the years. The fact that the Cultural centre which was only recently inaugurated has become a big drain on the temple’s wallet is the talk of the town. The original budget of the cultural centre blew up to an estimated more than 11 million dollars from around less than six million dollars. Why did that happen is a mystery?
The National Australia Bank (NAB) gave a loan of 5.5 million dollars for the construction of the cultural centre, the Brumby led ALP government gave a grant of one million dollars and around three million or so dollars were dished out of the temple account. Well, that’s not the end of the story because many contractors have not been paid their dues. Things have now come to a stage when the monthly mortgage on the NAB loan is becoming difficult to pay. This also when only interest is being paid on the loan. What happens if a default takes place can be anybody’s guess? Will the bank take over the cultural centre?
Scholars find it difficult to define ‘Hinduism’ and so decided to call it a ‘way of life’. But the ‘way of life’ at the Carrums Down temple, a place revered by thousands of devotees in Australia and overseas, has come to such a state that ‘Lakshmi’ (the Hindu goddess of wealth) and in common language meaning ‘wealth’ has been forced to pull out of the temple. This financial morass is undermining the spiritual high ground on which the temple stands.
The Board of Directors of the HSV Cultural centre Pty. Ltd. as Trustees for the HSV Charitable Trust, which runs the cultural centre has in a motion alleged serious assertions involving mismanagement of all sorts that ultimately, resulted in the loss of funds, goods and equipment. They feel “these allegations have cast a heavy shadow on the running of the temple and the cultural centre”. Hence have demanded an external audit to examine all activities including all financial and nonfinancial transactions of the Hindu Society of Victoria (Australia) Inc. Including all Trusts and Trust Funds set up by the Society or by any Trust (s) of which the Society is the main beneficiary. This audit, it demands, should cover the last seven years.
Talking to SAT, Dr. Noel Nadesan, former Editor ‘Uthayam’ said, “Our newspaper had a few years back questioned the viability of the cultural centre project.” (https://noelnadesan.com/2013/04/11/)
Well, in the interest of transparency, it looks fair that an external audit will bring out the facts and tell the community why ‘Lakshmi’ became angry with the HSV. It will also reinforce the confidence of devotees in the temple administration.
But it looks an external audit looks difficult as the HSV management committee does not look keen to have such an exercise. So, the cultural centre trust and the management committee are locked in a war of words over the issue. Why the management committee is reluctant for an external audit is not difficult to understand? Also, the community need not remain silent thinking that raising such an issue will give a bad name to their faith. In fact, it is necessary to clean up the mess and call a spade a spade.

Commentator and analyst of current affairs.
View all posts by noelnadesan →
This entry was posted in Uncategorized. Bookmark the permalink.