The many Balachandrans of Jaffna 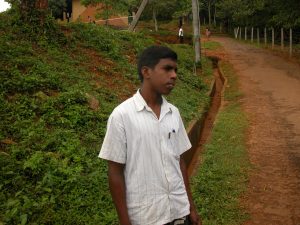 This 15 years old boy name is Rex .He was a Sinhala boy from Necombo visited mullaitivu 2007. He was forcibly taken by LTTE . I met him 2009 July in the under-age children rehabilitation Camp. lucky he survived.(Noel Nadesan)

The killing of Prabakaran’s son allegedly by Sri Lankan forces has evoked horror, but there can be no forgetting the children who were the LTTE’s cannon fodder
Way back in 1994, four Colombo-based Indian journalists and the Sinhalese correspondent of an international news agency got a rare permission to visit Jaffna. Rare because, at that time, the northern peninsula was almost totally controlled by the Tamil Tigers, who had driven out the government forces in conventional battles. Journalists required permission from both sides to the island’s festering conflict — the government and the LTTE — as well as from the International Committee of the Red Cross, the only agency which had been allowed access to the region by the Tigers.
That was a time when the Tigers were reportedly all set to make a Unilateral Declaration of Independence (UDI) for their proposed Eelam state, but had baulked only for fear of India’s reaction. They were only too aware that without New Delhi’s nod, the international community would ignore their UDI. But the Tigers apparently believed it was only a matter of time. Therefore, prior to issuing permission for the visit the scribes were informed they had to carry their passports because “immigration clearance” to enter Eelam was mandatory.
So, one fine September morning, V. Jayanth of The Hindu, Apratim Mukharji of Hindustan Times, Vijay Satokar of PTI, Amal Jayasinghe of the French news agency AFP and this writer, who was then Sri Lanka correspondent of UNI, flew from Colombo to the Palaly base of the Sri Lankan Air Force by a commercial flight operated by the air force.
The military camp at Palaly and the deserted brick-and-mortar buildings in the vicinity that were once homes to local people were covered with pockmarks after repeated but unsuccessful attempts over the years by the Tigers to overrun the strategic base. From the base, we were quickly transported by a vehicle flying the white ICRC flag to the Kankesanthurai naval base, a few km away. There we boarded an ICRC ship that took us to the Tiger-controlled Point Pedro port, at the tip of the peninsula.
Armed Tiger cadres then took over our group for a two-day guided tour of the region to show how they had withstood “successfully” the Sri Lankan government’s harsh economic embargo — no electricity, no petrol and diesel, no food, no nothing…. Even the Jaffna Medical College hospital was reeling under the ban.
Eye-opener
The tour was an eye-opener to the Jaffna man’s ingenuity — running auto-rickshaws on coconut oil after firing the engine with a few drops of petrol that every driver kept zealously in a dropper in his shirt pocket; and providing light for children with specially made earthen-lamps, a few drops of kerosene and paper wicks. At a court in Jaffna town a female LTTE cadre, who looked like she was still in her teens, was the magistrate before whom seasoned lawyers in their black robes argued some case.
At a deserted children’s amusement park, seesaws had AK-47 replicas for grip, while in the immaculately-kept Tiger cemetery stretched rows of graves of LTTE cadres killed in action.
But the most abiding memory of that trip was triggered recently on seeing the poignant pictures of the forlorn Balachandran, the 12-year-old son of LTTE chief V. Prabakaran, who was apparently shot dead by Sri Lankan troops in cold blood. We were visiting an exhibition the Tigers had organised on the grounds of the Nallur Kandaswamy Temple when we came across a group of 15-20 children, younger-looking than Balachandran and not half as well fed. They were all in military fatigues, wore caps and walked silently in single file. Seeing our surprised looks, the guide explained that they were “cadets” of the LTTE’s military academy.
Hundreds of such children, many forcibly taken away from schools, had been sent as cannon fodder by Prabakaran and his lieutenants in the fanatical pursuit of their dream. In fact, some of us who managed to slip out of Subhash Hotel, where we stayed, were told by long-time contacts that child recruitment by the Tigers had become so rampant that mothers and fathers stood guard outside school gates to prevent “cradle snatching”.
There were whispers that while most children suffered the fate of being sent off to fight, Prabakaran’s older son, Charles, then just about as old as Balachandran was when he was killed, was driven to school in an air-conditioned SUV and wore expensive clothes and shoes that others could only dream of.
This then is a requiem for not only Balachandran but all those nameless children who perished fighting in the Sri Lankan conflict.
(P. Jayaram is a senior journalist and head of the department of Amrita School of Communication, Coimbatore. E-mail: Jayaramp_@hotmail.com)

Commentator and analyst of current affairs.
View all posts by noelnadesan →
This entry was posted in Uncategorized. Bookmark the permalink.